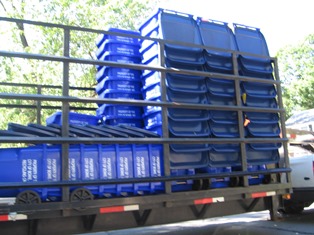 The City delivered a total of 19,595, 65-gallon and 35-gallon large, wheeled recycling carts to the residents of Bowie. The final phase of the large recycling cart distribution program was completed in 2012. This program has generally been received with overwhelming support from our residents and we are very pleased to see our recycling numbers steadily increasing.
Despite the initial outlay, the city expects the carts to save money in the long run. Each ton of refuse that is recycled rather than put in a landfill saves approximately $56 and helps the environment.

The goal of the program is to make it easier for residents to recycle more items and make it easier for them to get the items to the curb. Residents are asked to put the carts out with the handle facing the street. The carts can be lifted and dumped by a mechanical arm on the recycling trucks. The carts should never be used for trash.

Still have questions about the recycling carts or to request that one be delivered to your Bowie home? Call 301-809-2344. 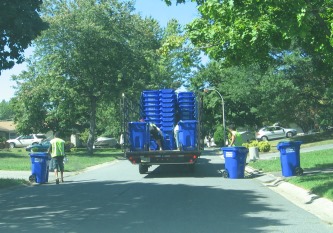