What Is Youth REACH MD?


Youth REACH MD (Reach out, Engage, Assist, & Count to end Homelessness) is an effort to obtain accurate, detailed information on the number, characteristics, and needs of unaccompanied homeless youth in Maryland.

The project was established during the 2014 legislative session by the Maryland General Assembly under Chapter 425 of House Bill 794, which identified the Maryland Department of Housing and Community Development (DHCD) as the lead government agency overseeing the Demonstration Project.

A Steering Committee comprised of individuals representing the General Assembly, government agencies, local Continuums of Care (CoCs), and other key organizations was formed to guide the activities of the Demonstration. DHCD contracted with The Institute for Innovation & Implementation, University of Maryland School of Social Work (The Institute) to serve as the Coordinating Entity, managing the primary activities of the Demonstration Projection. Under the guidance of the Steering Committee, the Institute will coordinate with the CoCs named in the legislation, which will serve as the implementing bodies for Maryland’s upcoming Demonstration Youth Count. 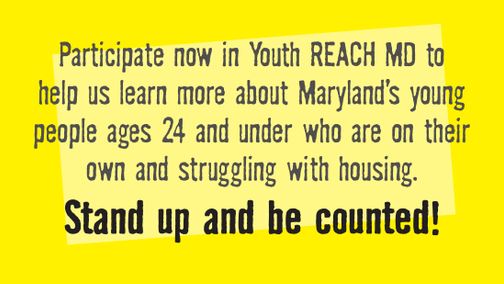 For Youth REACH Maryland, it defines an “unaccompanied homeless youth” as a person who is: