The long-awaited update of the 2006 Approved Master Plan for Bowie and Vicinity is now underway.  On February 18, 2020, the Prince George’s County Council (District Council) approved CR-5-2020, initiating the update to the Master Plan.  The District Council also approved the Goals, Concepts and Guidelines and a Public Participation Program for the project in CR-5-2020.  The Maryland-National Capital Park and Planning Commission (M-NCPPC) is responsible for updating the Master Plan.

M-NCPPC’s current schedule for production of the Bowie and Vicinity Master Plan is below: 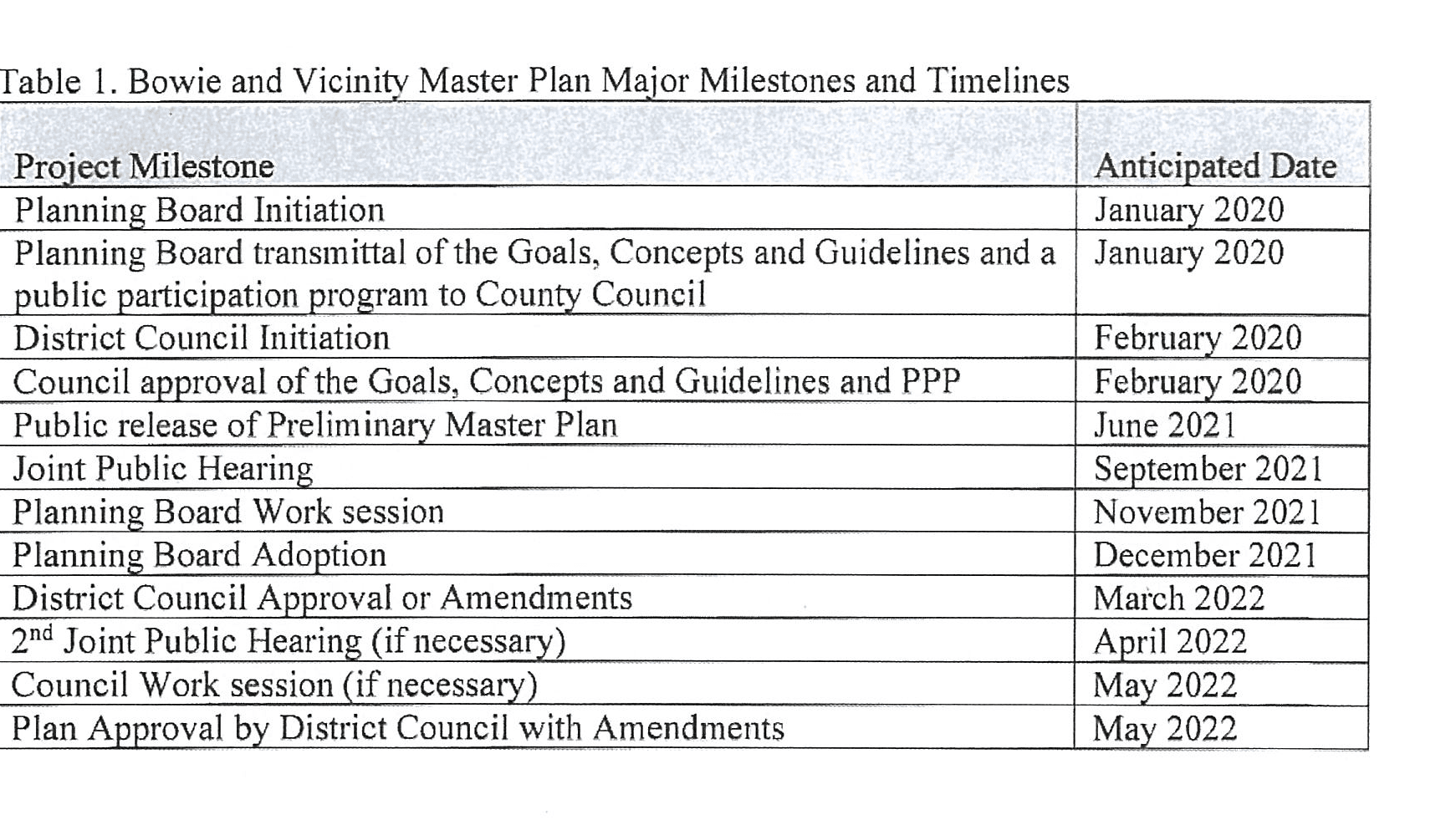 Approved Master Plan for Bowie and Vicinity and Sectional Map Amendment for Planning Areas 71A, 71B, 74A, and 74B  (February 2006)

This document contains text and maps of the Approved Master Plan for Bowie and Vicinity and the Sectional Map Amendment for Planning Areas 71A, 71B, 74A, and 74B. This plan amends the 1991 Approved Master Plan and Adopted Sectional Map Amendment (SMA) for Bowie-Collington-Mitchellville and Vicinity, Planning Areas 71A, 71B, 74A, and 74B. It also amends the 2002 Prince George’s County Approved General Plan and other functional master plans. This plan was developed primarily during a community-wide six-day planning charrette after consultation with citizen focus groups. The document provides visions, goals, background, policies and strategies for numerous planning elements. The Development Pattern element encourages the revitalization of Old Town Bowie and redevelopment of Bowie Main Street, West Bowie Village, and Pointer Ridge. These four existing commercial areas are designated as mixed-use activity centers suitable for a wide array of public, commercial, employment, and residential land uses. The plan recommends that ﬂexible zoning regulations be enacted to preserve rural character and sensitive environmental features. The Area-Wide Infrastructure element addresses the environment, transportation, schools, ﬁre, police, library, parks, and trails. The Community Character element addresses economic development, historic preservation, and scenic roads. Rural and Developing Tier boundaries designated in the 2002 General Plan and boundaries of the Bowie Regional Center are redeﬁned. Land use concepts and illustrative sketches are included that encourage development centered on a future transit hub in the Bowie Regional Center. A Development District Overlay Zone (DDOZ) containing a regulating matrix, design standards, and a table of uses are included to facilitate implementation of the plan’s land use recommendations for Old Town Bowie. The sectional map amendment implements the land use concepts in the master plan.

For planning purposes, the County is divided into seven subregions, which are further divided into 36 planning areas. Each planning area is a fairly cohesive district that is typically bounded by a major highway, political boundary, and/or a natural border such as a stream valley.  Master plans may be prepared for an individual planning area, group of planning areas, or entire subregions.  Master plans provide specific recommendations on the environment, historic preservation, living areas and housing, commercial areas, employment areas, urban design, circulation and transportation (including highways and mass transit), and public facilities. Where appropriate, some plans may cover additional issues such as economic development and neighborhood revitalization. Master plans also address the adequacy of public facilities. Land use proposals are analyzed for their impact on schools, police, fire, rescue, libraries, health, parks, and trails. Recommendations are then made to correct any projected deficiencies of these public services and assets. In addition, an analysis of the balance between the proposed land uses and the proposed transportation system is undertaken. The master plans are the final authority on highway and mass transit right-of-way land reservations. The planned land uses become the basis for decisions on where new schools, fire stations, and other public facilities will be needed in the future. Master plans are also used to guide decisions on zoning change, special exceptions, and subdivision applications. Probably the most important function of the area master plans is that they are used as the basis for comprehensive rezoning (sectional map amendments).