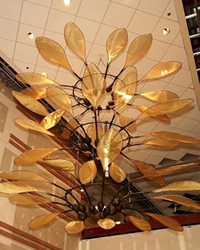 The City of Bowie commissioned two large pieces of public art for its new City Hall, which opened in 2011. One is a kinetic sculpture entitled “Triple Crown” that hangs in the rear lobby of the main floor of the building. The sculpture was created by Philadelphia artists Joel Erland and Kate Kaman to honor some of the greatest race horses to ever run on American turf.

Bowie’s Belair Stable has long been known as the “Cradle of Thoroughbred Racing,” a title it earned in the 18th century when English thoroughbreds were imported to the colonies to the Belair Mansion with the intent to ‘build a better thoroughbred.” The Belair Stable in the 20th century was home to Gallant Fox (1930) and Omaha (1935), the only father and son racehorses to ever capture the Triple Crown.

The large sculpture is three rings of petals, totaling 39 petals, of bronze mesh. Each petal is approximately four feet long and one and a half feet wide. The sculpture is 12-foot long and 12-foot wide. It is an imaginative interpretation of the Black-Eyed Susan flower, the state flower of Maryland, and also the kind of flower used in flower blankets given to racehorses that win the Preakness Stakes, one of the Triple Crown horse races.